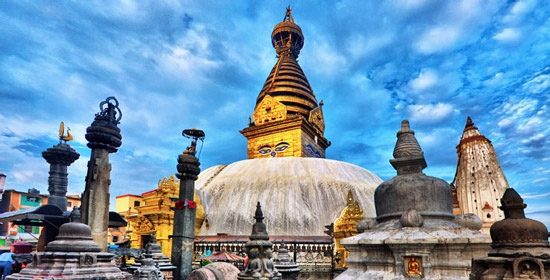 Swayambhu is an ancient religious complex on top of the hill in the Kathmandu Valley, west of Kathmandu city. It is one of the most popular, holy and instantly recognizable symbols of Nepal. It is also known as the Monkey Temple as there are holy monkeys living in the north-west parts of the temple. It is listed in UNESCO World Heritage Sites.

The Swayambh complex consists of a stupa, a variety of shrines and temples, some dating back to the Licchavi period. A Tibetan monastery, museum and library are more recent additions. The stupa has Buddha's eyes and eyebrows painted on. Between them, there is a painted, which looks like the nose.

The site has two access points, in the east a long stairway, claimed to have 365 steps, leading directly to the main platform of the temple, and a way around the hill from the south leading to the southwest entrance.

Much of Swayambu's iconography comes from the Vajrayana tradition of Newar Buddhism. However, the complex is also an important site for Buddhists of many schools, and is also revered by Hindus.

The Stupa
Swayambhunath Stupa is a golden spire crowning a conical wooded hill. It is the most ancient and enigmatic of all the holy shrines in Kathmandu Valley. It has a lofty white dome and a glittering golden spire that are visible from all sides of the valley. Historical records found on a stone inscription give evidence that the stupa was already an important Buddhist pilgrimage destination by the 5th century A.D. i.e. before the coming of Buddhism in the valley.

Harati Temple
The temple is dedicated to the goddess of smallpox and other epidemics. The presence of the Harati Devi temple signifies the intermingling of the pantheons of Hinduism and Buddhism in Nepal.

Palace Of Peace
Atop Syambunath hill is another fascinating, though less visited temple, Shantipur, popularly known as the 'Palace of Peace'. It is said that inside the secret underground chamber of the temple lives the 8th century Tantric master, Shantikar Acharya. The master, it is believed, has lived through centuries and has full control on the weather and the King of Kathmandu must go to him in times of drought.

Amazing to look at, the architectural beauty of Swayambunath Temple gives way to the feelings of reverence and adoration. The stupa consists of a dome at the base and a cubical structure with eyes of Buddha looking in all the four directions. There are pentagonal Toran present above each of the four sides with statues engraved in them. Behind and above the torana there are thirteen tiers. Above all the tiers, there is a small space above which the Gajur is present.

According to Swayambhu Puran, the entire Kathmandu valley was once filled with an enormous lake, out of which grew a mystical Lotus. The valley came to be known as Swayambhu, meaning 'Self-Created' or 'Self-Existent'. The Bodhistava Manjushri had a vision of the lotus at Swayambhu and traveled there to worship it.

In order to make the site more accessible to human pilgrims, Manjushri cut a gorge through the mountains surrounding the valley. The water drained out of the lake, leaving the valley in which Kathmandu now lies. The lotus was transformed into a hill and the flower become the Swayambhunath stupa.

The dome at the base represents the entire world. When a person gets free (represented by eyes of mercy and self knowledge) from the bonds of the world, the person reaches the state a bit higher. After that, the person has to cross thirteen stages represented by the tiers before attaining Nirvana (salvation).