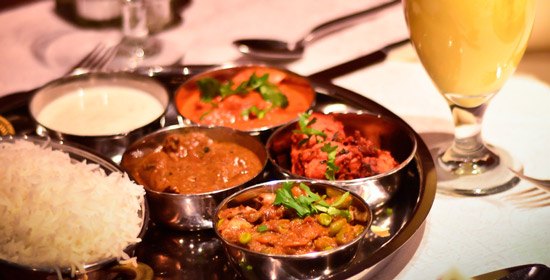 The Nepali cuisine, also known as the cuisine of the Himalayas, bears its uniqueness by incorporating the two great culinary traditions of the region, Indian and Tibetan, into a mainstream culinary culture of its own, which reflects the geographic and demographic diversity of the Himalayas. Nepal, a tiny country by any geographic measurements, stretches from the lowlands of the sub-tropical Terai plains in the south to the highlands of the Himalayas, as dominated by the majestic reign of Mt. Everest, in the north.  Hence, Nepal has resurrected its own unique cultural identity into a harmonious culture, combining different traditions of different indigenous cultures rooting on all corners of the country.

Nepali food, which is simple and subtle in flavor, is prepared by using unique blend of common ingredients and spices. Commonly used flavoring ingredients are garlic, ginger, cumin, coriander, turmeric, nutmeg, bay leaves, black pepper, chilies, onions, cilantro, and scallions. Also, distinct Himalayan flavors are derived from the use of such unique spices asTimur (Szechwan pepper, commonly used in marinades and achars) and Jimbu (Himalayan herb, used fresh or dry), found only in the Himalayas.  In addition, most dishes are flavored with mustard oil, clarified butter (ghee), and sometimes Yak butter. Because of harsh conditions prevailing in the highlands of the Himalayas, foods are preserved by dehydrating or fermenting staple ingredients during their growing season. Examples include Sukuti (dehydrated meat) and Gundruk (fermented vegetables). A typical full-course Nepali meal would include an appetizer, a vegetable or lentil soup, two or more vegetable and meat preparations, and an achar or chutney, served with roti (flat wheat bread), steamed rice or rice pilaf, supplemented with a local beverage, such as yogurt drink (lassi), beer or liquor, and followed by a dessert and tea.