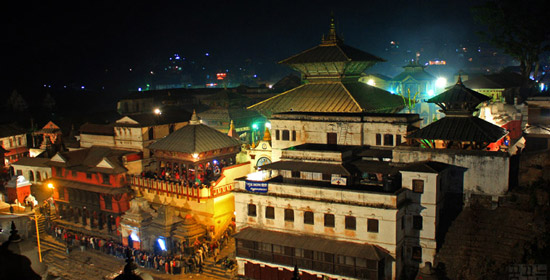 Pashupatinath Temple is one of the most significant Hindu temples of Shiva in the world, located on the banks of the Bagmati River in the eastern part of Kathmandu, the capital of Nepal. The temple serves as the seat of the national deity, Lord Pashupatinath. It is regarded as the most sacred among the temples of Shiva (Pashupati). It is listed in UNESCO World Heritage Sites.

Pashupatinath Temple, with its astonishing architectural beauty, stands as a symbol of faith, religion, culture and tradition. Regarded as the most sacred temple of Hindu Lord Shiva in the world, Pashupatinath Temple's existence dates back to 400 A.D. The richly-ornamented pagoda houses the sacred linga or phallic symbol of Lord Shiva. Thousands of pilgrims from all over the world come to pay homage to this temple, that is also known as 'The Temple of Living Beings'.

There are many legends describing as to how the temple of Lord Pashupatinath came to existence here. Some of them are narrated below:

The Cow Legend
Legend says that Lord Shiva once took the form of an antelope and sported unkown in the forest on Bagmati river's east bank. The gods later caught up with him, and grabbing him by the horn, forced him to resume his divine form. The broken horn was worshipped as a linga but overtime it was buried and lost. Centuries later an astonished herdsmen found one of his cows showering the earth with milk. Digging deep at the site, he discovered the divine linga of Pashupatinath.

The Linchchhavi Legend
According to Gopalraj Vamsavali, the oldest ever chronicle in Nepal, this temple was built by Supus Padeva, a Linchchhavi King, who according to the stone inscription erected by Jayadeva 11 in the courtyard of Pashupatinath in 753 AD, happened to be the ruler 39 generations before Manadeva (464-505 AD).

The Devalaya Legend
Another chronicle states that Pashupatinath Temple was in the form of Linga shaped Devalaya before Supus Padeva constructed a five storey temple of Pashupatinath in this place. As the time passed, the need for reparing and renovating this temple arose. It is learnt that this temple was reconsturcted by a mediaeval King named Shivadeva (1099-1126 AD). It was renovated by Ananta Malla adding a roof to it.

Pashupati area is regarded as one of the most important places of pilgrimages for the followers of Hinduism. Thousands of devotees from within and outside the country come to pay homage to Pashupatinath every day. And on special occasions like Ekadasi, Sankranti, Mahashivratri, Teej Akshaya, Rakshabandhan, Grahana (eclipse), Poornima (Full moon day) the whole atmosphere turns festive and mirthful as people congregate here in a far greater number.

During the Shivaratri festival Pashupatinath temple is lit with ghee lamps throughout the night and the temple remains open all night. Thousands of devotees take ritual baths in the Bagmati river on the day of the festival and observe a fast for the whole day. Hundreds of sadhus (sages) from different parts of Nepal and India come here on the occasion of Maha Shivaratri.

During the Teej festival, thousands of women visit the temple to bathe in the holy waters of the Bagmati River. Because this ritual is meant to bring a long and happy marriage, many women dress in red saris, which are traditionally worn for wedding ceremonies. Full moon and New moon days are also considered auspicious to visit the temple.