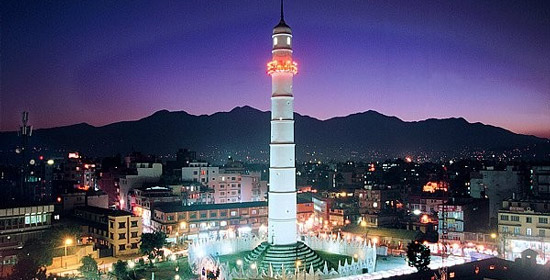 Kathmandu (Nepali: काठमाडौं, काठमान्डु, Nepal Bhasa: यें) is the capital city of Nepal and the largest city in Nepal. The city is situated in Kathmandu Valley that also contains two other cities - Patan and Bhaktapur. The original inhabitants of Kathmandu are called Newars, who speak a language called Nepal Bhasa. However, Nepali is the lingua franca of the valley and the most widely spoken language. The city stands at an elevation of approximately 1,300m (4,265 ft) and is inhabited by about 1.5 million people. Kathmandu is located at 27°43′N, 85°22′E (27.71667, 85.36667).

The Kathmandu Valley may have been inhabited as early as 900 BC, but the oldest known objects in the valley date to a few hundred years BC. The earliest known inscription is dated 185 AD. The oldest firmly dated building in the earthquake-prone valley is almost 1,000 years old. It is said that the Buddha and his disciples spent some time in the area of present-day Patan in the 6th century BC, although there is no evidence for this. Four stupas around the city of Patan said to have been erected by Charumati, daughter of Ashoka the Great, a Mauryan king, in the 3rd century BC attest to the ancient history present within the valley. As with the tales of the Buddha's visit, there is no evidence supporting Ashoka's visit, but the stupas probably do date to that century. The Kirats are the first documented rulers of the Kathmandu Valley, the remains of their palace are said to be in Patan near Hiranyavarna Mahavihara (called "Patukodon"). The Licchavi Dynasty whose earliest inscriptions date back to 464 AD were the next rulers of the valley and had close ties with the Gupta Dynasty of India. The Malla Dynasty consisted of Newar rulers, who ruled Kathmandu Valley and the surrounding area from the 12th century till the 17th century when the Shah Dynasty under Prithvi Narayan Shah conquered the valley as he created present-day Nepal. Most of ancient Nepalese architecture present in Nepal today is from the Malla/Newar era.

The city of Kathmandu is named after a structure in Durbar Square called Kaasthamandap. In Sanskrit, Kaasth (काष्ठ) = "wood" and Mandap (मंडप/मण्डप) = "covered shelter." This unique temple, also known as Maru Satal, was built in 1596 A.D. by King Laxmi Narsingh Malla. The entire structure contains no iron nails or supports and is made entirely from wood. Legend has it that the timber used for this two story pagoda was obtained from a single tree.

Kathmandu is also sometimes called "Kantipur". Newars, the native people of the Kathmandu valley use the original term from Nepal Bhasa, Yne.

The Kathmandu Valley consists of three primary cities: Kathmandu itself, Lalitpur and Bhaktapur. Lalitpur and Kathmandu run up right against each other (again, separated only by the Bagmati river), while Bhaktapur is set off much closer to the eastern foothills.

Kathmandu itself is home to most of the government offices, embassies, corporate houses, and the palace. The King's Palace stands right next to Thamel - the tourist hub of the country. Thamel consists of two parallel streets just to the west of the palace. It is home to different hotels, ranging from different stars. The palace is at the head of Durbar Marg, a street lined with various shops.

Most of the streets in Kathmandu are named from Nepal Bhasa, owing its origin to the rich Newari Culture and heritage.

The "old" city is noted for its many Buddhist and Hindu temples and palaces, most dating to the 17th century. Many of these landmarks have been damaged by earthquakes and pollution. This valley hosts an UNESCO World Heritage Sites composed by seven different Monument Zones: The centers of the three primary cities, Kathmandu Hanuman Dhoka, Patan and Bhaktapur, the two most important Buddhist stupas, Swayambhunath and Boudhanath and two famous Hindu shrines, Pashupatinath temple and Changu Narayan. Since 2003 the site has been inscribed in the World Heritage List as being "in danger" out of concern for the ongoing loss of authenticity and the outstanding universal value of the cultural property.

Kathmandu has been popular with western tourists since the 1960s when it became a key stop on the hippie trail, when Jho: Chhee (Nepal Bhasa, continuous house)(Freak Street) was the one of the main location. It is also the subject of a popular Bob Seger song for the same reason.

Tribhuvan International Airport is located about 6 km from the city center, offering domestic and international flights.