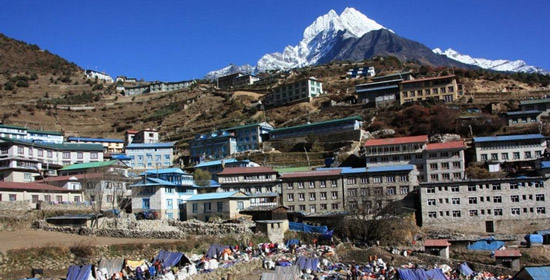 Namche Bazaar (नाम्चे बजार−also Nemche Bazaar or Namche Bazar) is a village in the Khumbu region of Nepal. Namche is located at 3,440 metres (11,286 ft.) (the low point that is), populating the sides of a hill. From the bridge over the Dudh Kosi, the trail winds its way up a "big" hill, finally cresting at a small building which also serves as an army/police check point.

Almost everyone trekking in the Khumbu region will visit Namche Bazaar, as it is the gateway to the high Himalaya. Visitors are likely stay at least one night, if not two for altitude acclimatization. The village has many shops and lodges where one can find almost anything required for trekking (no camera repair shops), although prices are higher than in Kathmandu. However, the higher you go up into the Khumbu, the more expensive everything gets so by the time you reach Lobuche (4,930m/16,175'), the prices in Namche will seem quite reasonable.

Namche is the main trading center for the Khumbu region so there are many Nepalese officials, a police check post and a bank. Near the top of the village is the headquarters for Sagarmatha National Park as well as Nepalese army barracks.

Above Namche BazaarOn a hill overlooking Namche Bazaar is the Shyangboche Airstrip (3,750m / 12,303ft). This is not generally used as its surface of loose pebbles makes it unsuitable for fixed wing aircraft, but it does enable visitors to reach Namche Bazaar by helicopter.

Many trekkers get up before sunrise and walk up to the Sagarmatha National Park Headquarters to take in the impressive views of Mount Everest, Lhotse, Thamserku, Ama Dablam (6,856m/22,493') and other magnificent peaks (though these can only be seen on a clear day) and to visit the museum. Pictures of peaks to the west from this vantage point such as Kongde Ri, cannot be taken as the army barracks are between you and these mountains. The army does not permit pictures to be taken of the barracks. Because of the proximity of the army barracks, the Sagarmatha National Park Headquarters is surrounded by a large amount of barbed wire.

A good acclimatisation walk from Namche Bazaar goes to Everest View Hotel, which is at an altitude of 3,800m / 12,467ft. As the name suggests, the hotel gives good views of Everest (when it is not enveloped in cloud) and this is generally considered the best view in the surrounding area. Everest View Hotel is a luxury hotel, which has had mixed success. Although the rooms are oxygenated, many guests have become sick. The hotel does, however, have the only decent restaurant serving western food in the region.

On Saturday mornings, a weekly market is held in the center of the village. People from all around the Namche area come to sell their wares, to locals and to visitors alike. The market usually starts around sunrise and begins to break up around 11 am. Also, there may be a daily Tibetan market where clothing and cheap Chinese consumer goods tend to be the main articles for sale. Tibetan merchants come to the market by way of high passes through the Himalayas.

Namche Bazaar has two internet cafés, making it the only place in the region where trekkers can access the internet. Both internet cafés connect via satellites and so the resulting connection speed is slow.

The village also contains a German bakery, well known in the region for providing good quality western food, including pizza.