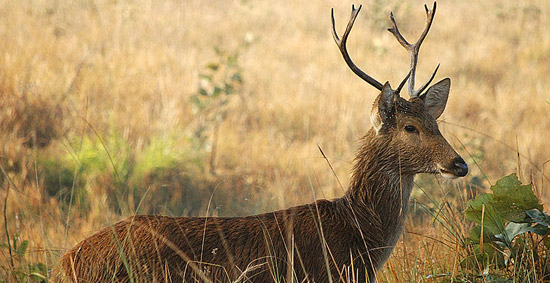 Shuklaphanta Wildlife Reserve was managed as a hunting reserve beginning 1969, and was gazetted as a Wildlife Reserve in 1976, covering an area of 305 sq. km. It lies in the extreme south-western section of Nepal’s Terai in Kanchanpur District. The reserve shares a common boundary with the Indian state of Uttar Pradesh in the south and west which is formed by the Mahakali (Sarda), River, and a major tributary of the Ganges. It is bordered on the eastern side by the Chaudhar River and to the north by a forest belt and cultivations. A total of 24 mammal species was recorded by Schaff (1978b), a total of 350 species of birds of which 180 are breeding species (Inskipp, 1989), Bhatt and Shrestha (1977) provide an annotated list of 14 species of fish, Schaaf (1978b) recorded 10 species of ectoparasites and biting flies.

Although the area of the Reserve is small, it supports a wide range of biodiversity which is nationally and globally important. The vegetation types primarily include sal forest, sal savanna, which is part of continuum between climax forest and grassland that is maintained by fire and floods. The reserve supports the largest population of Bengal florican Houbaropsis bengalensis (E) and swamp deer Cervus duvauceli (E).

The area has a tropical monsoon climate with four different seasons:winter, spring, summer and monsoon.The months of December and January are fairly cold and misty with occasional frost.The mean monthly minimum temperature varies from 10 to 12 o C in winter , gradually rising to 17oc in the spring and 26oCin the summer.Over 90% of the annual precipitation fall during monsoon between June and September. Mean maximum temperatures are 40-42°C in summer (April-May), when hot westerly winds of up to 160km per 4hour have been recorded. (Balson, 1976). In February and March, the maximum temperature rises up to 22o to 25ocC.The relative humidity remains fairly high throughout the the year except in the dry months of the pre-monsoon period.

The reserve is accessible by the road as well as air. The reserve will be easily accessible by road from any parts of Nepal with the completion of the far-western sector of east-West Highway. There is once a week flight from Kathmandu to Dhangadhi which is 51 km far from the park headquarters. There is regular public bus service from Dhangadhi to Mahendranagar taking 3 hours drive and the reserve headquarters is 8 km south-west of Mahendranagar. The reserve can be reached by East-west Highway through Nepalgunj-Dhangadhi-Mahendranagar.

Some 54.7% of the reserve is covered by mixed deciduous forest, grassland and marsh in the south-west where soils are of recent alluvium. The rest is moist deciduous forest and savanna, supported by the better drained soils on higher terrain in the north-east (Balson, 1976).

The main vegetation types distinguished by Schaaf (1978a, 1978b) are: sal Shorea robusta forest; sal savanna, which is part of a continuum between climax forest and grassland that is maintained by fire or floods; mixed deciduous forest, which is patchily distributed among the more extensive grasslands in the south-west (sal is absent); grasslands, which may be dry (locally known as phantas) or wet in the case of areas inundated during the monsoon; lowland savanna, which occurs on the fringes of all main grasslands and covers most of Karaiya Phanta; khair-sissoo forest, dominated by Acacia catechu and Dalbergia sissoo and forming an early succession in riverine areas; and marsh, in which tall dense grasses are predominant (e.g. Phragmites karka, Saccharum spontaneum and Sclerostachya fusca).