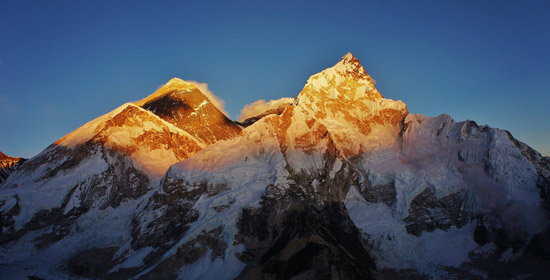 In 1953, a ninth British expedition, led by John Hunt, returned to Nepal. Hunt selected two climbing pairs to attempt to reach the summit. The first pair Tom Bourdillon and Charles Evans came within 100 m (330 ft) of the summit on 26 May 1953, but turned back after running into oxygen problems. As planned, their work in route finding and breaking trail and their caches of extra oxygen were of great aid to the following pair. Two days later, the expedition made its second and final assault on the summit with its second climbing pair, the New Zealander Edmund Hillary and Tenzing Norgay, a Nepali sherpa climber from Darjeeling, India. They reached the summit at 11:30 am local time on 29 May 1953 via the South Col Route. At the time, both acknowledged it as a team effort by the whole expedition, but Tenzing revealed a few years later that Hillary had put his foot on the summit first.

Mt. Everest has two main climbing routes, the southeast ridge from Nepal and the north ridge from Tibet, and many other less frequently climbed routes. Southeast ridge is considered technically easier to climb and is the more frequently used route. It was the route used by Edmund Hillary and Tenzing Norgay in 1953 and the first recognized of fifteen routes to the top by 1996.

Most climbing attempts are made during May before the summer monsoon season. As the monsoon season approaches, a change in the jet stream at this time pushes it northward, thereby reducing the average wind speeds high on the mountain. While attempts are sometimes made after the monsoons in September and October, when the jet stream is again temporarily pushed northward, the additional snow deposited by the monsoons and the less stable weather patterns makes climbing extremely difficult.

The ascent via the southeast ridge begins with a trek to Base Camp at 5,380 m (17,700 ft) on the south side of Everest in Nepal. Expeditions usually fly into Lukla (2,860 m) from Kathmandu and pass through Namche Bazaar. Climbers then hike to Base Camp, which usually takes six to eight days, allowing for proper altitude acclimatization in order to prevent altitude sickness. Climbing equipment and supplies are carried by yaks, dzopkyos (yak-cow hybrids) and human porters to Base Camp on the Khumbu Glacier. When Hillary and Tenzing climbed Everest in 1953, the British expedition that they were part of over 400 climbers, porters and sherpas started from the Kathmandu Valley, as there were no roads further east at that time.

Climbers will spend a couple of weeks in Base Camp, acclimatizing to the altitude. During that time, Sherpas and some expedition climbers will set up ropes and ladders in the treacherous Khumbu Icefall. Seracs, crevasses and shifting blocks of ice make the icefall one of the most dangerous sections of the route. Many climbers and Sherpas have been killed in this section. To reduce the hazard, climbers will usually begin their ascent well before dawn, when the freezing temperatures glue ice blocks in place. Above the icefall is Camp I at 6,065 metres (19,900 ft).

From Camp I, climbers make their way up the Western Cwm to the base of the Lhotse face, where Camp II or Advanced Base Camp (ABC) is established at 6,500 m (21,300 ft). The Western Cwm is a flat, gently rising glacial valley, marked by huge lateral crevasses in the centre, which prevent direct access to the upper reaches of the Cwm. Climbers are forced to cross on the far right near the base of Nuptse to a small passageway known as the "Nuptse corner". The Western Cwm is also called the "Valley of Silence" as the topography of the area generally cuts off wind from the climbing route. The high altitude and a clear, windless day can make the Western Cwm unbearably hot for climbers.

From ABC, climbers ascend the Lhotse face on fixed ropes up to Camp III, located on a small ledge at 7,470 m (24,500 ft). From there, it is another 500 meters to Camp IV on the South Col at 7,920 m (26,000 ft). From Camp III to Camp IV, climbers are faced with two additional challenges: The Geneva Spur and The Yellow Band. The Geneva Spur is an anvil shaped rib of black rock named by the 1952 Swiss expedition. Fixed ropes assist climbers in scrambling over this snow covered rock band. The Yellow Band is a section of interlayered marble, phyllite, and semischist, which also requires about 100 meters of rope for traversing it.

On the South Col, climbers enter the death zone. Climbers typically only have a maximum of two or three days that they can endure at this altitude for making summit bids. Clear weather and low winds are critical factors in deciding whether to make a summit attempt. If weather does not cooperate within these short few days, climbers are forced to descend, many all the way back down to Base Camp.

From Camp IV, climbers will begin their summit push around midnight with hopes of reaching the summit (still another 1,000 meters above) within 10 to 12 hours. Climbers will first reach "The Balcony" at 8,400 m (27,600 ft), a small platform where they can rest and gaze at peaks to the south and east in the early light of dawn. Continuing up the ridge, climbers are then faced with a series of imposing rock steps which usually forces them to the east into waist-deep snow, a serious avalanche hazard. At 8,750 m (28,700 ft), a small table-sized dome of ice and snow marks the South Summit.

From the South Summit, climbers follow the knife-edge southeast ridge along what is known as the "Cornice traverse", where snow clings to intermittent rock. This is the most exposed section of the climb as a misstep to the left would send one 2,400 m (8,000 ft) down the southwest face, while to the immediate right is the 3,050 m (10,000 ft) Kangshung Face. At the end of this traverse is an imposing 12 m (40 ft) rock wall called the "Hillary Step" at 8,760 m (28,740 ft).

Hillary and Tenzing were the first climbers to ascend this step and they did it with primitive ice climbing equipment and ropes. Nowadays, climbers will ascend this step using fixed ropes previously set up by Sherpas. Once above the step, it is a comparatively easy climb to the top on moderately angled snow slopes—though the exposure on the ridge is extreme, especially while traversing large cornices of snow. With increasing numbers of people climbing the mountain in recent years, the Step has frequently become a bottleneck, with climbers forced to wait significant amounts of time for their turn on the ropes, leading to problems in getting climbers efficiently up and down the mountain. After the Hillary Step, climbers also must traverse a loose and rocky section that has a large entanglement of fixed ropes that can be troublesome in bad weather. Climbers will typically spend less than half an hour at the summit to allow time to descend to Camp IV before darkness sets in, to avoid serious problems with afternoon weather, or because supplemental oxygen tanks run out.

Euophrys omnisuperstes, a minute black jumping spider, has been found at elevations as high as 6,700 metres (22,000 ft), possibly making it the highest confirmed non-microscopic permanent resident on Earth. It lurks in crevices and may feed on frozen insects that have been blown there by the wind. It should be noted that there is a high likelihood of microscopic life at even higher altitudes.

Birds, such as the Bar-headed Goose, have been seen flying at the higher altitudes of the mountain, while others such as the Chough have been spotted as high as the South Col at 7,920 metres (25,980 ft) scavenging on food, or even corpses, left by prior climbing expeditions.