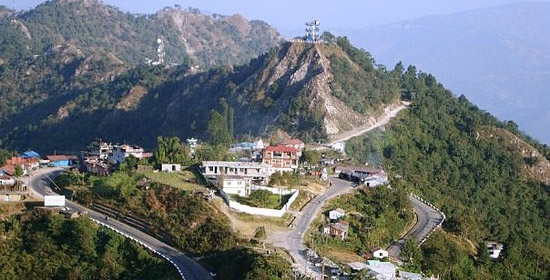 Hetauda(हेटुडा) is a small town in the central part of Nepal, located in the district of Makawanpur, in the zone of Narayani. It is 132 km away from the capital Kathmandu via the old Tribhuwan Highway. There are now two alternate roads that are less than 80 km. They are, however, not black topped yet. The city is enclosed by three rivers, the Rapti to the west, the Samari to the north and the Karra to the south. It is one the important industrial regions of Nepal. The settlement could have started due to its location at the meeting point of two major highways - East-West Highway and Tribhuwan Rajpath.

Hetauda is one of the cleanest and greenest cities in Nepal. Due to its geographical features and its climate, it has been a popular choice for people migrating from the northern hilly regions to the south. Hetauda is a doon, which means that it has a valley like geography. It is surrounded by hills: the Mahabharata range in the north and the Siwalik range in the south. The rivers Rapti, Samari, and Karra run through this area and flow southwest to meet Narayani, one of the bigger and popular rivers in the nation.

It is an hour's drive from the Nepalese border city of Birgunj, which is adjacent to its Indian counterpart, Raxaul. Both the existing highways to the capital city Kathmandu - Tribhuwan Highway and the East-West Highway, aka Mahendra Highway that trails the length of the nation - traverse through this city. with so many entry and exit points leading in and out of this town, Hetauda is set to grow into a commercial powerhouse if only the country realized its potential.

Hetauda is mostly a working-class residential town, and therefore most people here are either employed by the industries or the government. Individual entrepreneurship tends to favor investment into transportation sector. Trucking is thus a popular business proposition as majority of goods plying to Kathmandu goes through this city.

Among the big industries, Hetauda boasts of a cement factory whose production is aided by the ample supply of limestones that come from the northern Hills that form the base of the Mahabharata range. These limestones are blasted off of the quarry with the use of dynamites and then transported via ropeway directly to the Factory's production unit, which is situated 11 kilometres south across the town. Recently though, the use of the ropeway has declined tremendously due to lack of care and maintenance.

Among the popular attractions of Hetauda is the unique Martyr Memorial Park which was constructed to honor the martyrs of Nepal, including the ones who lost their lives since the time of British colonial wars to the ones who overthrew the autocratic Panchayat system in 1989. The Park has become a tourist spot since its completion in 1994. The main attraction of the park are the sculptures of these martyrs that are sculpted on one big boulder. The sculpting of the faces was accomplished by the student volunteers of Nepal Lalit Campus.

Similarly, Makwanpur Gadhi is another site east of the city, a fort of historic importance dating back to the unification process of Nepal. Prithvi Narayan Shah, the king that led the unification of the country into a greater Nepal, was married to the princess of Makawanpur whose father was a king of the Sen dynasty that ruled Makawanpur. Historians observe that this marriage, in fact, was a political strategy by King Prithvi Narayan Shah, who saw the strategic benefit of an alliance with Makwanpur to encircle Kathmandy valley.

Hetauda's commercial prominence started with the construction of Tribhuwan Highway, the first highway built in the country. Its future depends on a second highway link that has been discussed for over a decade. The proposed link to Kathmandu through a series of tunnels will reduce the present length of 133km via Tribhuwan Highway and 224 km via Mugling to a length of less than 60 km. Considering the need for a shorter route from Kathmandu to India and a transit point to sustain trade between the two fastest growing economies of India and China, the importance of Hetauda as a trade route is set to receive a big leap, if this proposed tunnel comes into existence.