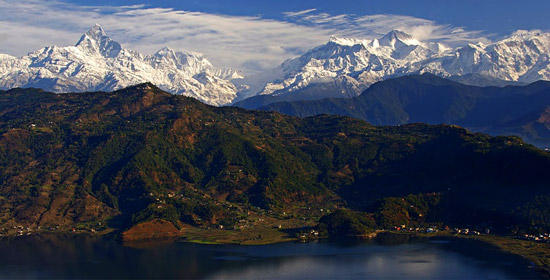 The Annapurna Conservation Area (ACA) contains some of the world’s highest peaks the world's deepest valley-the Kali Gandaki River Valley. It is the Nepal’s largest protected area of 7629 sq. km. It was established in 1992. The proposed conservation area encompasses the Annapurna range in Western Nepal. It is bounded to the north by the dry alpine deserts of Mustang and Tibet (China), to the west by the Kali Gandaki River, to the east by Marsyandi Valley and to the south by valleys and foothills north of Pokhara (Sherpa et al., 1986).

The nearest town is Pokhara, some 30 km to the south. Access is by road from Pokhara Nandanda, and from then onwards by foot. The ACA has an entire habitats gradient from sub tropical sal forest to perenial snow harboring 22 different forest types with 1226 plant species including 55 endemics, 30 mammals and 456 birds.

Annnapurna area conservation is located near Pokhara , a town easily accessible from Kathmandu by air and road .Bus or taxi services are available from Pokhara to Jomsom which is located in the northern part of Annapurna Conservation Area. Alternative route is to reach to Phedi by bus or taxi and walk 1.5 days to reach to Ghandruk via Dhampus -Landruk.Annapurna sanctuary and base camp is located at 6-7 days trek from Ghandruk.