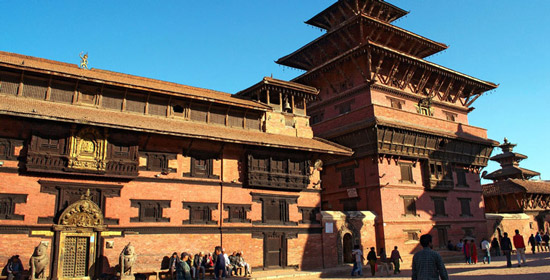 Patan Durbar Square is situated at the centre of Patan city, also known as Lalitpur. It is one of the three Durbar Squares in the Kathmandu Valley, all of which are UNESCO World Heritage Sites. It houses the Ancient Royal Palace of Malla Kings.

The Durbar Square is a marvel of Newar architecture. The Square floor is tiled with red bricks. There are many temples and idols in the area. The main temples are aligned opposite of the western face of the palace, they are Krishna Temple, Bhimsen Temple and the Golden Temple of Hiranya Varna.

Mul Chowk
This is the most famous and one of the largest courtyards among three main chowks. Bidya Temple is located at the center of the courtyard and the Taleju temples stand around the courtyard.

Keshav Narayan Chowk
Keshav Narayan Chowk is towards the northern part. Dominating Degutale temple is next to it. It is the site of the earliest Malla palace in Patan. The Chowk sits on the older foundations of a Buddhist monastery.

Krishna Temple
This temple of red stone, dedicated to Hindu Lord Krishna was erected in the 17th century. The temple is considered to be the first one to be constructed in Shikara architecture. Thanks to this attribute, it holds a commanding position in the durbar square. The elegant shikhara-style temple is ranked as one of the gems of Durbar Square. The temple is compared with sacred Mount Meru, which is abode of the god Shiva according to Hindu scriptures.

Mahaboudha
Buddhist temple Mahaboudha, which is made of clay bricks, lies to the east of the Durbar Square. Hundereds of Buddha images are engraved in the bricks. The temple is known for its fine terra cota work.

Kumbheshwor
The five-storied pagoda-style Lord Siva temple was constructed by King Jayasthiti Malla. Inside the temple is a natural spring whose source, is said to be the famous glacial lake of Gosainkunda. The golden work was added later in 1422 A.D. One the festival of Janai Purnima, ritual bathing takes place and a fair is also held.

Jagat Narayan Temple
Jagatnarayan temple is a tall shikhara style temple devoted to Lord Vishnu. Red bricks are used for the construction of the temple. The temple also holds a fine metal statue of Garuda, Ganesh and Hanuman, all related to Hindu religion and mythology.

Rudra Varna Mahavihar
This Buddhist monastery holds amazing collection of images and idols in metal, stone and wood. Legend holds that the Kings in the ancient times were crowned in this monastery. Many of the treasures offered by the people can be seen here even today.

The Ashokan Stupas
Indian Emperor Ashoka visited Nepal in 250 B.C and constructed four ancient stupas at the four corners of Patan. The four stupas are located in Pulchowk, Lagankhel, Ebahi and in Teta (way to Sano Gaon) respectively.