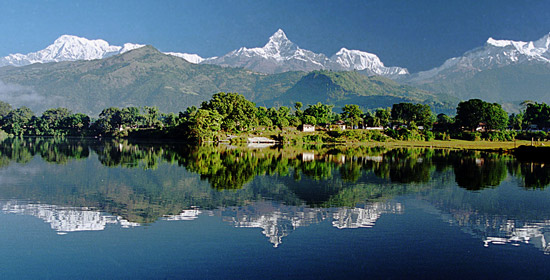 Pokhara (पोखरा) is a city in central Nepal located at 28.24 N, 83.99 E,, 198 km west of Kathmandu. It is the capital of Kaski District, Gandaki Zone and the Western Development Region. It is also one of the most popular tourist destinations in Nepal.

Pokhara is situated in the northwestern corner of the Pokhara Valley, which is a widening of the Seti Gandaki valley The Seti River and its tributaries have dug impressive canyons into the valley floor, which are only visible from higher viewpoints or from the air. To the east of Pokhara is the municipality of Lekhnath, another town in the valley.

In no other place the mountains rise so quickly, within 30 km, from 1000 m to over 8000 m. The Dhaulagiri, Annapurna and Manaslu ranges, each with peaks over 8000 m, can be seen from Pokhara and there is a lake named Phewa Lake, two caves (Mahendra and Gupteswar) and an impressive falls(Patale Chhango or Devi /David's Falls) where the water from the Phewa Lake thunders into a hole and disappears. Due to this sharp rise in altitude the area of Pokhara has one of the highest precipitation rates of the country (over 4000 mm/year). Even within the city there is a noticeable difference in the amount of rain between the south of the city by the lake and the north at the foot of the mountains.

The climate is sub-tropical but due to the elevation the temperatures are moderate: the summer temperatures average between 25 - 35°C, in winter around 5 - 15°C.

In the south the city borders on Phewa Tal (a lake of 4.4 km² at an elevation of about 800 m above sea level), in the north at an elevation of around 1000 m the outskirts of the city touch the base of the Annapurna mountain range. From the southern fringes of the city 3 eight-thousanders (Dhaulagiri, Annapurna, Manaslu) and, in the middle of the Annapurna range, the Machapuchare (Nepali: Machhapucchare: 'Fishtail') with close to 7000 m can be seen. This mountain dominates the northern horizon of the city and its name derives from its twin peaks, not visible from the south.

Pokhara lies on an important old trading route between Tibet and India. In the 17. century it was part of the influential Kingdom of Kaski which again was one of the Chaubise Rajaya (24 Kingdoms of Nepal) ruled by a branch of the Shah Dynasty. Many of the mountains around Pokhara still have medieval ruins from this time. In 1752 the King of Kaski invited Newars from Bhaktapur to Pokhara to promote trade. Their heritage can still be seen in the architecture along the streets in Bagar (Old Pokhara). Hindus, again, brought their culture and customs from Kathmandu and settled in the whole Pokhara valley. In 1786 Prithvi Narayan Shah added Pokhara into his kingdom. It had by then become an important trading place on the routs from Kathmandu to Jumla and from India to Tibet.

From 1959 to 1962 some 300.000 refugees came to Nepal from neighbouring Tibet, which had been annexed by China. Four refugee camps were established in the Pokhara valley: Tashipalkhel, Tashiling, Paljorling and Jambling. These camps have evolved into settlements. Because of their different architecture, prayer flags, gompas and chorten, these can easily be distinguished from the other settlements.

Until the end of the 1960s the town could only be reached by foot and it was considered even more a mystical place than Kathmandu. The first road was finished in 1968 after which tourism set in and the city grew rapidly. The area long the Phewa Lake developed into one of the major tourism hubs of Nepal.

Pokhara spans 8 km from north to south and 6 km from east to west but, unlike Kathmandu, it is quite loosely built up and still has much green space. The Seti Gandaki flowing through the city from north to south divides the city roughly in two halves with the down-town area of Chipledunga in the middle, the old town centre of Bagar in the north and the tourist district of Lakeside (Baidam) in the south all lying on the western side of the river. The gorge through which the river flows is crossed at five points, the major ones are (from north to south): K.I. Singh Pul, Mahendra Pul and Prithvi Highway Pul. The eastern side of town is mainly residential.

About half of all tourists visiting Pokhara are there for the start or end of a trek to the Annapurna Base Camp and Mustang. For Nepalese, Pokhara has become the most favorite place to live in the country.

Phewa Lake was slightly enlarged by damming. It is in danger of silting up because of the inflow during the monsoon. The outflowing water is partially used for hydro power. The dam collapsed in the late 1970s and it was rebuilt by the Chinese. The power plant is located about 100 m below at the bottom of the Phusre Khola gorge. Water is also diverted for irrigation into the southern Pokhara valley.

The eastern Pokhara Valley receives irrigation water through a canal running from a reservoir by the Seti in the north of the city. Phewa Lake is also used for commercial fishing. The tourist area is along the north shore of the lake (Lake Side and Dam Side). It is mainly made up of little shops, little hotels, restaurants and bars. The larger hotels can be found on the southern and south-eastern fringes of the city, from where the view of the mountains, mainly Mt. Fishtail is seen best. To the east of the valley are few smaller and few bigger lakes, the largest being Begnas Tal and Rupakot Tal. Begnas Tal is also known for its fishery projects. There are no beaches in the valley, but one can rent boats Phewa and Begnas Tal.

After the annexation of Tibet by China the trading route to India became defunct. Today only few caravans from Mustang still arrive in Bagar.

Pokhara has become a major tourist hub of Nepal, more than making up for the loss of its trading importance. The city offers a combination of nature and culture with a distinct tourist district in the southern subdivisions of Baidam, Lakeside and Damside. It is mostly known as starting and ending point for Annapurna treks.

Pokhara is quite a modern city with only few touristic attractions in the town itself. Most interesting is the old centre in the north of the city (purano bazar) where still many old shops and warehouses in the Newari style can be found. Mule caravans still arrive there from Mustang.

On a hill overlooking Phewa Tal from the south is the World Peace Stupa (at 1,113 m) QTVR built in 1996 with a view of the lake, across the city and of the snow peaked mountain range consisting of namely, Fishtail, Annapurna and Dhaulagiri Himals (mountains).

The best viewpoint of Pokhara is Sarangkot (1600 m) to the west of the city. Paths and a road lead to the top from where one can enjoy spectacular views of the Annapurna range, Manaslu, Dhaulagiri and the city itself.

The modern commercial city centre at Chiple Dhunga and Mahendrapul (now called Bhimsen Chowk, named after a Shahid(Martyr) in Jana-aandolan II, April, 2006) is halfway between the lake and Purano Bazar, the old centre. Apart from this there are several subcentres in other parts of town: in the north in Bagar, in the south between Prithvi Chok and Srijana Chok (mainly hardware stores), and in the east, on the other side of the Seti, in Ram Bazar.

The shortage of touristic sites in Pokhara is made up by its scenic views in and around town. Most of them are not mentioned in any guide or map. The Seti Gandaki (White Gandaki) and its tributaries have created spectacular gorges in and around the whole city. The Seti gorge runs through the whole city from north to south. At places it is only a few metres wide, but 100 m deep with a water depth of 20 m.

In the middle of the city, the gorge widens to a canyon looking like a crater. In the north and south, just outside town, there are awesome canyons, in some places 100 m deep. These canyons extend through the whole Pokhara Valley. Impressive views are possible from the Prithvi Narayan Campus and from the other side at the foot of Kahu Danda (conjunction of several rivers and canyons). Behind the INF-Compound one can see the Seti River disappear into a slit in an almost 100 m wall, especially impressive in monsoon.

Another place worth visiting is the Patale Chhango (Hell's Falls), more commonly called "Devi's or David's Falls" for the tourists with some melodramatic story behind it. The water of these falls comes from the Fewa Lake flowing to the Seti. The falls plunge into a hole and disappear. In monsoon this sight is most spectacular. Nearby, across the street is a little cave (Gupteshwor Cave). A more exciting cave is at the opposite end of the city in Batulechaur (Mahendra Cave). Betulechaur is known for the musicians caste of the Jains.

Pokhara Airport is situated in the middle of town serving flights to Kathmandu, Jomsom, Manang, Bhairahawa and Bharatpur. Helicopters to Manang and Jomsom are also available for charter.

An interesting institution of Pokhara is the British Gurkha Camp in the north of the city. It has been established as a recruitment camp for Nepalis as Gurkha soldiers. About 370 are selected annually in December out of a pool of over 20,000 applicants. About 140 eventually join the Gurkha Contingent in Singapore while the rest join the British Army.