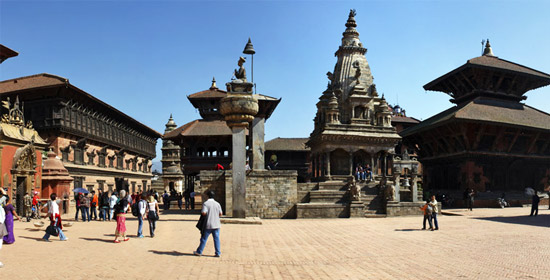 Bhaktapur Durbar Square is the plaza in front of the Royal Palace of the old Bhaktapur Kingdom. It is one of three Durbar Squares in the Kathmandu Valley in Nepal, all of which are UNESCO World Heritage Sites.

Bhaktapur Durbar Square is an assortment of pagoda and shikhara-style temples grouped around a fifty-five-window palace of brick and wood. The square is part of a charming Kathmandu Valley as it highlights the idols of ancient kings perched on top of stone monoliths, the guardian deities looking out from their sanctuaries, the wood carvings in very place - struts, lintels, tympanums, gateways and windows.

The Lion Gate
The massive gate that dates back to 1696 AD is guarded by two huge statues of lions at the either sides. The dreadful stone image of Lord Shiva and the fearful image of Ugrachandi attract the tourists from far off.

The Golden Gate
The Golden gate is said to be the most beautiful and richly moulded specimen of its kind in the entire world. The door is a embellished with monsters and mythical creatures of marvellous intricacy. The Golden Gate was erected by King Ranjit Malla and is the entrance to the main courtyard of the Palace of fifty-five windows.

The Palace of Fifty Five Windows
Keshav Narayan Chowk is the Northern-most part of the Patan Darbar palace complex, with the dominating Degutale temple next to it. This magnificent palace was built during the reign of King Yakshay Malla in AD 1427 and was subsequently remodeled by King Bhupatindra Malla in the seventeenth century. Among the brick walls with their gracious setting and sculptural design, is a balcony with fifty-five Windows, considered a unique masterpiece of woodcarving.

The Art Gallery
The Art Gallery contains ancient paintings belonging to the Hindu and Buddhist traditions of various periods and descriptions. The gallery is particularly famous among researchers on Hinduism and Buddhism.

The Statue of King Bhupatindra Malla
This statue depicts King Bhupendra Malla in the act of worship and is located on a column facing the palace. This is considered the most magnificent statue among the many statues in the squares.

Nyatapola
This is the most famous pagoda of Nepal, which was built in 1702 A.D by Bhupatendra Mala. This temple was dedicated to Siddhilaxmi, the tantric mother goddess of supreme power. Nyatapola in Newari means a five tiered symbolizing five basic elements - water, earth, fire, wind and sky.

Pashupati Temple
According to a folklore, a Bhaktapur native who was a great devotee of Lord Pashupati, had a dream in which lord Shiva told him to build a temple for him so that he could move into it. He obeyed this command and thus the temple came into existence.

Vatsala Temple
This 17th century stone temple, dedicated to a mother goddess, is full of intricate works on stone.