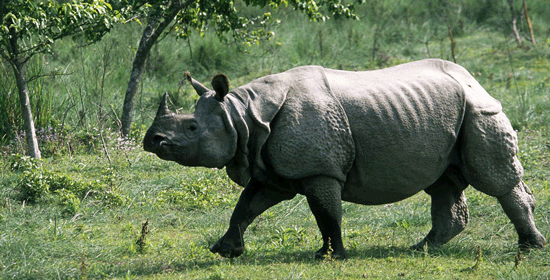 Royal Bardia National park is the largest national park in the lowland Terai covering on area of 968 sq.km. The park situated in Nepal's Western Terai was established to protect representative ecosystems and conserve tiger and its prey species. Initially, a small area was gazetted as the Royal Karnali Wildlife Reserve in 1976.

1500 households of the Babai valley were resettled outside the park allowing the vegetation and wildlife to flourish. In 1982, it was renamed as Royal Bardia Wildlife Reserve, and in 1984 it was extended to its current size. The reserve was given the status of a National Park in 1988. Greater One-horned Rhinoceros were translocated from Royal Chitwan National Park in 1986, 1991, 1999, 2000, 2001 and 2002.

In 1997, an area of 327 km2 surrounding the park was declared as a buffer zone, which consists of forests and private lands. The park and local communities jointly manage the buffer zone. Together they initiate community development activities and manage natural resources in the buffer zones.

An elephant ride provides a different view of the park as one can go off the main trail, Morning and late afternoon is the ideal time to go on a ride. Karnali river is the suitable home for Gangetic dolphin. Babi valley is a majestic place to visit where flagship Rhino, tiger, elephant can be observed in the wilderness site.

The Babai valley extending from Parewa odar to Chepang (bridge) was included In the park in 1984. The pristine valley is characterized by rich biodiversity. The major vegetation and forest type are wooded grassland and the riverine forest. The translocated rhinoceros from Chitwan were reintroduced in this valley. The luxurious forests in the east of the park also provide a good habitat and corridor for several wildlife species. The Karnali river is home to the endangered Gharial crocodile and Marsh mugger. The blue waters also provide habitat for the endangered Gangetic dolphin. Large Mahasheer, a game fish, is considered an excellent catch.

The fast flowing water also provide excellent rafting expeditions that can stop in the park. Riverine forests along with the shores of the river creating prime habitat for birds such as Herons, Egrets, Black-necked, stork, and Little pratincole. The Tharu ethnic group is native to this area. Traditionally they are subsistence farmers and practice their own tribal religious. Handicrafts made by the community members could be bought as souvenirs.

The park has three distinct seasons, each providing a unique experience. Form October through early April the weather is dry. The days are warm, and the nights are cool and pleasant. From April to June the temperatures warm up, are peaking up to 450c in May. The hot sticky days give way to the monsoon rains that lasts until September.

The park offers a variety of experiences in its vast undisturbed wilderness. About 70% of the forest consists of Sal trees with a mixture of grassland and riverine forests.Sal leaves are used in festival and religious offering. The park is home to endangered animals such as the Royal Bengal tiger, wild elephant, Greater one-horned rhinoceros, swamp deer, and black buck, The other endangered species include gharial-crocodile, marsh mugger and Gangetic dolphin. Endangered birds found in the park are Bengal florican, lesser florican and sarus crane, More that 30 different mammals, over 230 species of birds and several species of snakes, lizard and fish have been recorded In the park's forest, grassland and river. In addition to the resident species, several migratory birds visit the park.

Museum and Tharu culture are available for visitors at HQ. The wireless radio communication facility at the park headquarters, could be used in emergency, If you are traveling by private vehicle make sure that you have ample amount of fuel. Be advised to carry a comprehensive first-aid kit including medicines for intestinal problems. There is a community health post at Thakurdwara. You can spend your nights at the lodges surrounding the pork. These lodges provide service to tourists.

You can take a bus from Kathmandu to Nepalgunj or take the daily flight. From Nepalgunj bus service is available to the park HQ at Thakurdwara during the dry season.