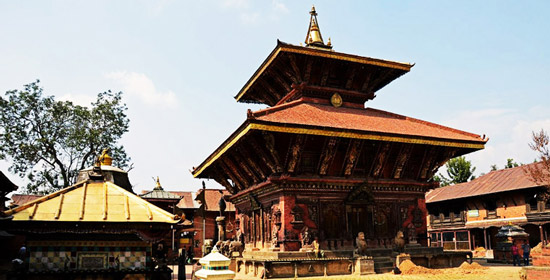 Changu Narayan Temple, the oldest temple in Kathmandu valley came in existence in 4th century. The temple is adorned by some of the best specimen of stone, wood, and metal craft in the valley. The temple stands as the epitome of culture, religion, history and faith of the Kathmandu valley. It is located on a high hilltop that is also known as Changu or Dolagiri. It is listed in UNESCO World Heritage Sites.

The temple is surrounded by forest with champak tree and a small village, known as Changu Village. The temple is located in Changu VDC of Bhaktapur District. This hill is about 8 miles east of Kathmandu and a few miles north of Bhaktapur. The Manahara River flows beside the hill. This shrine is dedicated to Lord Visnu and held in especial reverence by the Hindu people.

Garuda Idol
Inside the Changunarayan temple is a esteemed figure of Garuda. The statue is offered sweets by the devotees every year on Nag Panchami. This is done in remembrance of the epic struggle with the great snake Taksaka. The drops of moisture, believed to be effective against diseases such as leprosy and ulcers, are collected by the priests.

King Bhupendra Malla Statues
Statues of King Bhupalendra Malla of Kathmandu and his mother can also be seen in a shrine. Bloody fighting characterised their politics during the 17th century but both were generous when it came to revering the gods.

Vishnu Sculpture
To the north of the temple is a sculpture of Lord Vishnu seated on Garuda (Garudasana Vishnu). This image appears on the Nepalese 10 rupee note. Vishnu sculpture dates back to 9th century.

Vishnu Vikrant
The stone idol, harking back to the 8th century A.D, is of the most powerful form of Lord Vishnu. It is related to the Hindu legend of Vaman, an incarnation of Vishnu, who measured space with feet.

Vishnu Riding Garuda
This figure of Vishnu mounting Garuda, the mythical bird, dates back to the 10th century A.D.

Narsimhha Vishnu
This form of Lord Vishnu, the Narsimha, is in half human and half lion form.

Take a taxi from Bhaktpaur to reach Changu Narayan temple. The driv would be of approximately 30 minutes.