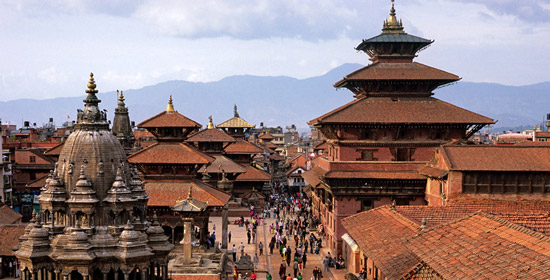 Patan (Sanskrit:पाटन, Nepal Bhasa:यल) is one of the major cities of Nepal. The official name of the municipality is Lalitpur and it lies in the district with the same name (inside Kathmandu valley). Patan is often considered to be the oldest and most beautiful among the three royal cities (Kathmandu, Patan, Bhaktapur) in the Kathmandu Valley. It is best known for its finest tradition of arts and crafts and its rich cultural heritage.

Patan is situated on the elevated tract of land on the south side of the Bagmati River in Kathmandu Valley. It was developed on relatively thin layers of deposited clay and gravel in the central part of a dried ancient lake known as Nagdaha.

Patan has a population of approx. 200,000 (2006) in an area of 4.59 km². It is the fourth largest city of the Kingdom after Kathmandu, Biratnagar and Pokhara. Lalitpur Sub metropolitan municipality is divided in to 22 wards.

The city spreads over 16 sq. kilometres and is divided into 22 Municipal wards. A substantial portion of the population is engaged in various trades, especially in traditional handicrafts and small scale cottage industries and the rest are busy in agriculture. Lalitpur is the only city in Nepal that has produced the highest number of renowned artists and finest craftsmen ever recorded in Nepalese Art History. The most famous Newar artists and master craftsmen like Arniko, Abhay Raj and Siddhi Raj were all born in Lalitpur<citation needed>. The city was initially designed in the shape of the Buddhist Dharma-Chakra (Wheel of Righteousness). The four thurs or mounds located on the perimeter of Patan are ascribed around, one at each corner of its cardinal points, which are popularly known as Ashoka Stupas. Legend has it that Emperor Ashoka (Legendary King of India) visited with his daughter Charumati to Kathmandu in 250 B.C. and erected five Ashoka Stupas, four in the surrounding and one at the middle of the Patan. The size and shape of these stupas seem to breathe their antiquity in a real sense. There are more than 1,200 Buddhist monuments of various shapes and sizes scattered in and around the city.

The most important monument of the city is Patan Durbar Square, which has been listed by UNESCO as one of seven Monument Zones that make up the Kathmandu Valley World Heritage Site.

The Patan Durbar Square is taken as the only monumental area in all three cities of the Kathmandu Valley that still outstands with its most magnificent architectural splendour and unique artistic beauty.

Patan has kept its cultural and its finest craftmanship alive even in the face of many social and political upheavals.

Lalitpur said to have been founded by King Veer Deva in 299 A. D. but, there is unanimity among scholars that Patan was a well established and developed town since ancient times. Several historical records including many other legends also indicate that Patan is the oldest of all the cities of Kathmandu Valley. According to a very old Kirat chronicle, Patan was founded by Kirat rulers long before the Lichhavi rulers came into the political scene in Kathmandu Valley. According to that chronicle, the earliest known capital of Kirat rulers was Thankot. Kathmandu, the present capital was most possibly removed from Thankot to Patan after the Kirati King Yalamber came into power sometimes around second century A. D.

One of the most used and typical Newar names of Patan is Yala. It is said that King Yalamber named this city after himself and ever since this ancient city was known as Yala.

Patan City was planned in Vihars and Bahils. Out of 295 Vihars and Bahils of the valley 56% of them are in Patan. The water conduits, stone spouts, Jaladroni (water tanks), artistic gate ways, Hindu temples and Buddhist Vihars adorn the city. The in built cultural heritage like the royal palace, with intricately carved doors and windows and beautiful courtyards adorned with exquisite icons enhance the beauty of the city. Such art pieces are found in stone, metal, terracotta ivory and other objects. All these artefacts exhibit artistic excellence of the craftsmen and the whole city looks like an open museum.

Patan is a very artistic city. Most of the Nepalese art of any form is devoted to Gods. So, there are a lot of temples and bihars in the city. The main places of interest are

Patan Durbar Square: The residence of the Malla rulers of the then Patan state which is now converted into a museum.
Hiranya Varna Mahaa Vihar: A Buddhist temple known locally as Golden temple
Banglamukhi temple: A Hindu temple
Kumbeshwor temple: One of the two five-story pagoda temples of the valley