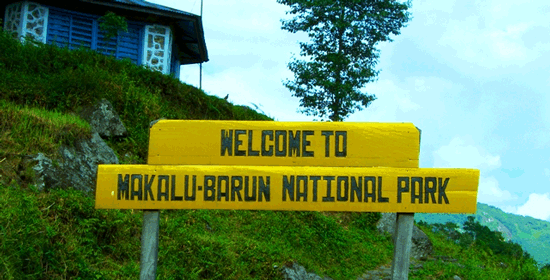 Makalu Barun National Park and Buffer zone area (previously conservation area) was established in 1992. This park administered and managed by Department of National Parks and Wildlife Conservation. His Majesty's Government of Nepal and supported by The Mountain Institute's initiative, is an innovative conservation model that integrates protected area management and community development.

A new park management approach encourages local people to become actively involved in protecting the forests and natural resources upon which their lives depend, and conserving their own rich cultural heritage. Traditional resource management systems, such as community controlled grazing and forest guardianship, are being strengthened and low technologies introduced where appropriate.

From tropical forests along the Arun River to icy mountain summits, Nepal's Makalu-Barun National Park and Buffer zone, covering 1500 + 830 sq, km. is the only protected area on earth with an elevation gain of 8,000m. The skyline is panorama of rugged Himalayan peaks, including Mt. Makalu (8,463m) fifth highest mountain in the world and fourth highest in Nepal. Mt. Chamlang (7,319m), Mt. Baruntse (7,129m). Mera Peak (6,654m) and Nepal known as peak hill.

Makalu-Barun area falls in the eastern Himalayan climatic regime where monsoon starts early (June) and stays longer than in west Nepal (until late September). The climate is generally described as monsoon type, where more than 70% of the precipitation occurs between June and September. Pre monsoon rain is common during the month of April and May, an important factor in biomes production. No reliable records of climatic data represent the entire area- Great variations in temperature and precipitation can be expected due to extreme difference in altitude, slope and aspect within the area

Recognized for its tremendous diversity of plants, animals and people, the area contains 25 species of rhododendron, 47 types of orchids, and 56 rare plants. Snow leopard, red panda, musk deer, wild boar, and they are among the wildlife found here.

Tha Makalu-Barun National park and Buffer zone headquarter is located at Murmidanda. Seduwa. A kerosene depot at Makalu Tourism Association as well as private lodgers in Tashingaou sales kerosene to all trekking groups including the porters. Makalu Tourism Association rent kerosene stoves and blankets for porters. The trekking group has to provide the facilities to the porters. There are four shelters built for the use of porters while they are inside the park. Neither the staff nor the porters should make fire inside the shelter as it is only for sleeping purpose.

Most trails are quite rocky, and become slippery after rain or overnight freezes. Until April or May, winter snows generally stay on the passes and on high altitude trails approaching shershong. One particular hazardous area is the trail between Mumbuk and Yangle Kharka, an area of unstable and dangerous Rock fall. Trekkers in this area should move quickly and watch for falling rocks. Mountain sickness can also be a serious risk if elevation gains are rapid without proper acclimatisation.