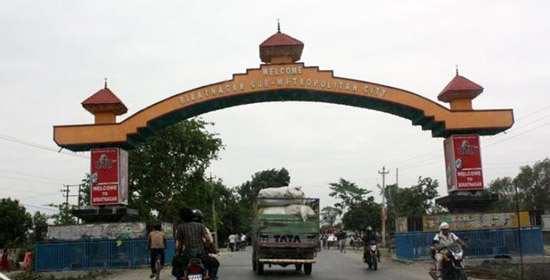 Biratnagar (बिराटनगर), a sub-metropolitan and Nepal’s second largest city is located in Koshi Zone on the southern Terai belt of Nepal, near the south-eastern border with India. The population of the municipality is 166,674 (2001 census). Biratnagar is located at 26°27'46"N 87°16'48"E. It is the administrative centre of Morang district.

Biratnagar is known for agriculture, commerce and industry. It performs as an important transit point for goods leaving and entering India through the nearby border crossing, and serves as a trading centre for the farming communities in what is one of the most densely populated areas of the country. The countryside around the city is taken up mostly by rice cultivation.

Biratnagar is linked with Kathmandu by road and air. Biratnagar Airport is the regional hub for vital air services serving the remote Eastern Hills, and there are regular flights to Kathmandu.

Nepal's first large scale industry was set up in Biratnagar: the Biratnagar Jute Mills in 1936. Today, the city has some of the largest industrial undertakings in the country. While taking a bus travel to Biratnagar from any other places, one can see a large number of industries on both sides of highway. Hundreds of small and medium sized industries operates freely including chemical, edible oil, steel, liquior, soaps factories, among others, covering large portion of area that links Biratnagar with Itahari, a central transit point of eastern Nepal.

The Koshi Tappu Wildlife Reserve (90-minute drive) is a bird-watching spot. The Koshi Barrage on the Koshi river (two-hour drive) is an impressive sight. Biratnagar is the hub of air routes in eastern Nepal.

Tourists discover Biratnagar on their way to the Himalayan states of India, Sikkim and Darjeeling. Visitors also arrive Biratnagar by air to begin their trekking to mountains such as Kanchenjunga. In recent days, tourists adventuring into Nepal’s tea growing regions like Ilam and Dhankuta often spend a day or two in Biratnagar.

Places to Visit in Biratnagar

The Culture of Biratnagar is the blend of Indian and Nepalese cultures. A lot of festivals are the same but only the manner in which they are celebrated differs among Nepalese and Indians living in Biratnagar. Some of the popular festivals are listed below.