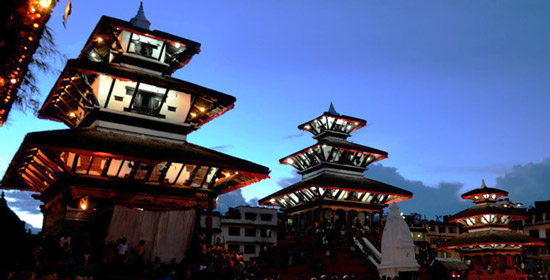 The Durbar Square is surrounded with spectacular architecture and vividly showcases the skills of the Newar artists and craftsmen over several centuries. It is decorated with elaborately-carved wooden windows and panels.

The Kathmandu Durbar Square holds the palaces of the Malla and Shah kings who ruled over the city. It is also known as Hanuman Dhoka Durbar Square, a name derived from a statue of Hanuman, the monkey devotee of Lord Ram, at the entrance of the palace.

The Palace Complex was the Royal Nepalese residence until the 19th century and is the site of important ceremonies, such as the coronation of the Nepalese monarch.

Kathmandu Durbar square is surrounded by cluster of ancient temples, palaces, courtyards and streets that date back to the 12th and 18th centuries. The square is known for the social, religious and urban focal point of the Capital City.

Taleju Temple
The temple is a famous Hindu and Jain religious site. The three-tiered temple is the first to be erected with more than two roofs and raised on a tall stepped platform. It is said that the mandir was built in the shape of a yantra on the advice of the Taleju Goddess herself and that she appeared to the King at the dedication ceremony disguised as a bee.

Mahendreshvara Temple
The simple yet beautiful temple was built by King Mahendra Malla and is dedicated to the Hindu Lord Shiva in the form of Pashupati. The temple was destroyed in a 1934 earthquake and rebuilt thereafter. The temple is a memorial to its founder.

Jagannath Temple
The Jagannath Temple is recognized as the finest of the group near Hanuman Dhoka. Exquisite wood-carvings embellish the doors, windows and roof struts, depicting a panoply of gods from the Hindu pantheon. Originally dedicated to Vishnu the shrine was later re-dedicated to Jagannath.

Dequtale Temple
The temple was built by Shivasimha Malla honoring the Mallas' family deity, Degutale. It resembles Taleju's shrine but with a tower-like base in place of the stepped platform. The worship of Degutale has its origins in a nature cult, the images being pieces of rock which the Newaris set up and worshipped.

Hanuman Dhoka
Palace facade turns at right angles between the Degutale Temple and the Taleju Mandir. This way is created Hanuman Dhoka (Hanuman is a monkey god). Hanuman idol placed in the dhoka has been anointed with mustard oil and vermilion through the centuries.

Nasal Chowk
Nasal Chowk takes its name from the little statue of the dancing Krishna in the shrine on the east side of the court. In Malla times the podium in the center of the court was used for dancing displays. The Shah kings chose to be crowned in Nasal Chowk, a tradition which continues today.

Mul Chowk
As the occasional abode of the goddess Taleju, the court is barred to visitors, though it is often possible to peep in through the gate and have a look at the exquisite beauty of the palace. The Chowk is opened to Hindus once a year when, on the ninth day of the Dasain Festival, hundreds of buffaloes and goats are sacrificed to the goddess.

Bhandarkal
Bhandarkal is a botanical garden created by King Pratap Mall in the mid 17th century. With its diverse flora, Bhandarkal is a treat for nature lovers and ecologists. The garden has been named after a seven-storied palace that possesses a statue of the Sleeping Vishnu, Jalashayana Narayan.

Vilar Temple
Between the Lalitpur and Basantpur Towers can be seen the magnificently carved façade of the three-storied Vilas Mandir, of a richness truly befitting a Temple of Luxury.

Trailokya Mohan Narayan Temple
The three storied temple has the figure of Garuda placed in its front and incarnations of Lord Vishnu within the temple. It was built by Prithvi Bendra Malla in 1680.

Shiva Temple
The Shiva Temple in Darbar Square is a replica of the Jaisi Deval and was built by Riddhi Lakshmi in 1690.

Shiva Parvati Temple
The long low building on the northern side of Durbar Square contains the beautiful shrines of Shiva and Parvati. This somewhat unusual building is believed to date from the time of Bahadur Shah. It is probably a reconstruction, the stepped platform on which it stands being considerably older than the temple itself.

Manju Deval
Dedicated to Shiva the large three-storied Manju Deval on its unusually high stepped base seems to dominate Durbar Square. It was built in 1692 by the mother of Bhupatindra Malla of Bhaktapur. Inside the temple there is a Shiva lingam. The small shikhara (temple tower in the North Indian style) at the foot of the steps honors Kam Dev, Shiva's shakti.

Kumari Bahal
The house of the Living Goddess, the Kumari Bahal looks like the monastery that was constructed in 1757 by Jaya Prakash Malla. Inside it lives the young girl who is selected to be the town's living goddess, until she reaches her first puberty and reverts to being a normal mortal.

Kasthamandap
Kasthamandap or house of wood is the building which gave Kathmandu its name. Legend narrates that the whole building is constructed from a Single Sal tree. At first it was a community hall where local people gathered for important ceremonies but later it was converted to a Temple of Gorakhnath. The image of Gorakhnath glitters at the center of the building.

Simha Sattal
Simla Sattal is located at the southern end of the Kathmandu Durbar Square. The residential style temple contains the Garuda Narayan figure, strange looking effigies and a little shrine of Harikrishna.